CP: As one of the judges for Core Gallery’s ‘DX Open Competition 2011, what will you be looking for when selecting artists?

CP: What is the significance of ‘independent’ competitions such as Core Gallery’s DX Open?


SW: Independent competitions are crucial to artists who are seeking opportunities and who may or may not have an existing network, providing a platform to exhibit their work and to have their work seen by a group of selectors and curators. Competitions also offer the organizers the opportunity to engage with a new pool of artists.
CP: You recently had an exhibition with Laura Eldret ‘The Multiplicity of a Moment’ at Five Hundred Dollars Gallery which was described as exploring “the tensions of a live moment between a viewer, and a series of objects and scenarios”. Could you describe how you and Eldret considered the work in relation to the past, present and future? And how intrinsic were the spectator’s within this staging?
SW: The exhibition was staged in a way that allowed the spectator to experience the space in two parts. The viewers entered the first gallery through a covered archway, which signaled the start to the exhibition where minimal artworks, made by both Laura and I, were displayed. These works could be defined as either as 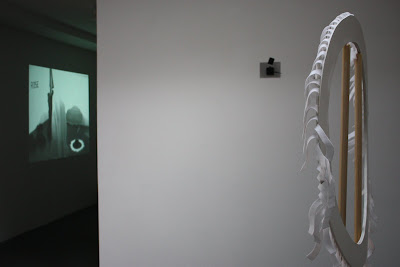 sculpture, props, backdrops, platforms or something ‘other’. This part of the exhibition showed potential to be an active space, almost like a stage or set.
The second gallery contained two films which ran concurrently. The films were created in the space before the exhibition opened to the public. Three dancers were invited to respond to the artworks in the exhibition and their performances were filmed in twenty-five minutes cycles on a black and white CCTV camera and digital camera.
The exhibition addressed the present moment (a spectator experiencing the objects and installation in the space), the past (the films which showed performance action that had occurred previously within the space) and the future (the potential for each objects/art work to be used for future interactions). The spectator was key in linking these phases together.

CP: Since 1999, you have collaboratively worked with Natalie Suggitt, creating various characters and scenarios in a continued attempt to transform yourselves. Where do you draw your inspiration for these fictive characters? And how important is the role of documentation within these performances?

SW: Our collaborative practice explores continued attempts to transform ourselves and our surroundings. Characters are created within strange, unexpected and ridiculous scenarios inspired by everyday happenings and daydreams. The work often plays upon the childlike desire in wanting to experience the world as another form, and from a new perspective, leaving behind the restrictions of the human body. Yet these transformation attempts inevitably result in frustrated failure and comment on our limitations of being human.
The live moment and subsequent documentation can sometimes be co-dependent. For example work doesn’t always materialize as a performance. We have made work as sculpture, photography and cardboard cut-outs which are then placed within a site specific environment. The use of photography, which comes from documenting a performative action, allows us to play with a sense of scale, where characters can be shrunk or enlarged in size. For example, ‘Metamorphosis series’ includes photographs of performances of us dressed as birds. The photographs were then printed to the same scale as a black bird and installed in trees at an exhibition in Queens Wood, London.
In 2000 I studied for a brief time in America in the sculpture department at Ohio State University and performance was a major way of working for artists there. I was taught by Stelarc and during that time he curated a series of 1 minute performance which I took part in. Some of the performance pieces have really stayed with me despite there being no existing documentation of the work. Performance can be a really potent medium because the work often relies on memory to exist, and the audience, are responsible for carrying that memory on to other places and experiences through recollection and story-telling.
Photographic, film or written documentation of a live moment cannot fully hope to capture an original performance, but can sometimes open up another angle to the work.

CP: Within these fictional scenarios you seem to move beyond the imaginary into the realm of the ‘virtual’ and the ‘other’, approaching the concept of fabulation. (Creation of fables / stories filled with fantasy). Fabulation is thus not a subjective or a deprived matter, it is rather a question of becoming and of visions and belongs to the world of affects and pure percepts, where a life appears as immanent and released from its subjective attachments, a life wrested from the personal lived. 1
How do these transformations of the ‘self’ help you to re-examine subjectivity and approach the ‘other’? Would you say there is a sense of futility in the continued attempts at transformation?
SW: Addressing issues of ‘other’ within the work inevitable leads back to the’ self’, the inadequacies of the human form and the true impossibility of attempting to transform to ‘other’. The key part of the performances and creation of fictive characters is to show the failure to become something other than the human self.

Made from rudimentary materials, the costumes and props embrace this sense of failure, but again represent potential to embody an imagined fictive space or situation. The characters, though aspirational in nature and in their appearance, will never be able to encompass the characteristics of the subjects they act or play. For example the professor who has built a time machine out of cardboard and tin foil won’t ever actually be able to travel forward or back in time (as with ‘Invention no.1) but can only imagine the possibility.
CP: What are you currently working on within your practice?


SW: My practice is curatorial and studio based. I see both aspects interlinked, feeding into one another. In my studio i’m currently working on a series of large scale drawings that explore monumentality, the partial recreation of stage sets and historic artifacts. These works contain a sense of failure within their format and scale. These works may prompt future performances or actions. I’m also really interested in how we discover information and how the internet is being utilised by artists as medium, subject matter and source material.

CP: Can you describe the unique programme of opportunities, awards, events and exhibitions that Jerwood Visual Arts Gallery provides?

SW: Jerwood Visual Arts (JVA) is a contemporary gallery programme of awards, exhibitions and events at Jerwood Space, London and on tour nationally. Jerwood Visual Arts promotes and celebrates the work of talented emerging artists across the disciplines of drawing, painting, sculpture, applied arts, photography and moving image and is a major initiative of the Jerwood Charitable Foundation.

JVA became an umbrella programme in 2006 and during that time we have worked with 549 artists, 85

selectors and curators and numerous writer and designers, bringing together a huge network of artistic practice. The programme is quite unique in that it focuses on specific art forms allowing us to investigate current approaches in drawing, painting, film and making. The Jerwood Encounters exhibition series allows us to create exhibitions across disciplines and to test out ideas.

Working for JVA allows for collaboration and the sharing of ideas. It is a dream to work with artists who are at relatively early stages in their career, who will go on to shape the future cultural landscape.

CP: You recently curated ‘SHOW’ (the fourth in a series of Jerwood encounters shows) which commissioned the work of artists Edwina Ashton, Jack Strange and Bedwyr Williams. Can you tell us more about your curatorial involvement within this and other exhibitions at Jerwood Visual Arts? And how have you sought to challenge the notion of exhibition making through performance and durational works?

SW: My role at Jerwood Visual Arts is to coordinate and curate the exhibition programme alongside Shonagh Manson, Director of the Jerwood Charitable Foundation and Parker Harris Partnership. I curate the JVA blog and work with 3 writers per year to use the JVA exhibition

programme as a spring board for their writing.
http://blog.jerwoodvisualarts.org/

‘SHOW’ was the fourth Jerwood Encounters exhibition that I curated for Jerwood Visual Arts and sought to examine the integral role that performance plays within an artist’s practice and its subsequent representation in an exhibition context. The exhibition consisted of live performances and experiments in performance documentation.www.jvashow.co.uk

As with ‘SHOW’ and other exhibitions I have previously curated for JVA I tend approach the exhibition as a medium and consider how that medium can best be utilised by both artist and curator in order to produce ambitious works and an interesting exhibition.

I work with artists who are making extraordinary works and are willing to take risks, working in an experimental way with unknown outcomes. I like to think that an exhibition can be an opportunity not only to showcase an artist’s work but to be a catalyst for an experimental way of working, where an artist gets to realise an idea within a supportive structure and with some funding. For example ‘Locate’ (2010) was an exhibition of three artists’ responses to the concept of ‘site’ with artists Mel Brimfield, Sarah Pickering and Aura Satz. The exhibition allowed for the creation of new bodies of work by each artist. www.jvalocate.co.uk/

In order to allow for experimentation, I set up a specific structured environment, a testing ground of sorts. For example the exhibition ‘Laboratory’ (2009) gave three artists, Steven Eastwood, Jock Mooney and Mia Taylor the opportunity to use a gallery space as an experimental site for the production of new work over a period of 4 weeks. The exhibition doesn’t have to be a static experience, but can be something that shifts and develops over a period of time. www.jvalab.co.uk

With these experimental exhibitions, I always create an online catalogue which have been made in partnership with Nick Eagleton at The Partners. This seems to be the most appropriate way to document the changes and developments that occur within a live or process-led exhibition. For ‘An Experiment in Collaboration’ six artists (Gemma Anderson, Daniel Baker, Michael Pybus, Paul Richards, Karen Tang and Jackson Webb) were asked to choose a collaborator/s to work with to create a new piece of work for the exhibition. The collaborative activity was mapped over the course of 5 months through an online blog:

CP: Do you have any forthcoming projects / news to divulge?

CP: Thankyou Sarah!
Posted by DIY Educate by ZeitgeistArtProjects. at 02:27