It is a pleasure to interview Graham Crowley, one of the most distinguished living painters in the UK today. Born in 1950, Graham Crowley studied at St. Martin’s School of Art London 1968-72 and Royal College of Art London 1972-75, and has held significant teaching posts including Professor of Painting at the RCA (1998-2006).
His paintings span a vast variance in style from the appropriationist art of the 70s to his brilliantly luminous landscapes of the present day, tracking a fundamental narrative with political, cultural and personal histories within them.

Crowley is one of the guest judges for the forthcoming ‘Open Competition at Core Gallery for Deptford X 2010’, where eighteen artists have been selected from an outstanding pool of entries from across the world. I speak to him to find out; his views on the education system, ‘modern art’ and what it was like to be a student in the revolutionary 60’s.

CP: How did you and the other judges arrive at a selection for Core Gallery's Deptford X 2010 Open Competition?


GC: I can’t speak for the other judges, but If you’re asking me how I chose work. I chose work by my assessment of it’s intentions, it’s sense of context, execution and insight. I did not choose it because I liked it. As I’ve come to understand that I don’t like art. I think of painting as a discourse and not merely as an activity, and I don’t regard it as shopping, either.

CP: What is the significance of 'independent' competitions such as the Core Gallery's Open Competition?

GC: Independent competitions are vital in providing a platform for work that isn’t being shown by commercial or public galleries. This becomes more important as the market seems to exert an increasing influence on public galleries. Peer group approval isn’t the same thing as commodification. I’ve said elsewhere that I think projects like The John Moores/Liverpool Exhibition provide a more comprehensive survey of British painting than just about anything else.


CP: What will you take into consideration when curating the show for ‘Core Gallery’s Deptford X 2010 Competition’?
GC: Bearing in mind that I’ll be one of 3 or 4 people involved in the curating. My immediate response is the audience. I’ll also attempt to hang the work in way that creates correspondence and dialogue between works. I’m also in the (now familiar, but problematic) position of not having (yet) seen the 18 finalists, except as digital images. I’m fully aware of the shortcomings of this method of selection. But this project and others like it wouldn’t have seen the light of day, as the cost of insurance, handling, transport and warehousing would have been prohibitive.
CP: In April 2008 you had a letter published in Art Monthly ‘Can’t get No Satisfaction’ where you expressed concerns about the state of art education in London. You stated ‘We now certificate, rather than educate’. How can the focus of ‘educating’ be restored?
GC: There’s no easy fix, and I suggest anybody who hasn’t already read my letter in the April 2008 edition of Art Monthly and (some of) the very extensive correspondence it provoked, to do so. Also view – ‘Angry students meet Sandra Kemp’ on You Tube. But, I suggest we go back to the ‘drawing board’. I come at this problem as a parent, a tax payer, an ex-academic (I was Professor of Painting at the RCA 1998-2006) and a painter.
Art schools should never have become universities. The primary reason that they became universities was political. We need a serious rethink. The imposition of what is called Taylorism (an American form of management efficiency) in higher education has been a disaster. It is blind to the social value of education. It acknowledges only certification. At what is currently foundation and undergraduate level I think one answer would be to look at some kind of re-invented ‘atelier’ model. A studio based ‘apprenticeship’ that promotes theory through practice, taught by practicing artists. I’m not suggesting we maintain the rather discredited teaching methods of approval and emulation. I imagine this to take place in artists’ studios or collectives, rather like The Core studios or similar.

CP: You studied at St. Martin’s School of Art, in 1968 a time where radical thinking and innovation was emerging. Can you tell us about your experience as a student then?
GC: Yes. I was caught up in a ‘cultural revolution’. The driving force behind the education that I received was an inexhaustible curiosity about life and society, fueled by scepticism and affirmed by dissent.
To ask intelligent questions, requires an education. That was why the Tories abolished the ILEA, (Inner London Education Authority). They couldn’t bear the idea of quality mass education. That’s why, still today, the police
behave in an intolerant, violent and abusive manner when confronted by well organised and legitimate demonstrators, whether they be trade unionists or environmentalists.
Education is seen by the establishment as enabling social unrest. So now the state has a monopoly; selling useless pieces of paper at an exorbitant price and calling them degrees. Education is a human right not a commodity.


As a post-graduate I had to deal with the crisis in modernism. I realised that the two principal doctrines of modernism; originality and self expression, were now hollow rhetoric.
The ‘dominant discourse’ was conceptualism. As a student at St Martins I got involved in performance and wrote ‘plays about plays’. But I’d always had this love-hate relationship with painting. So when painting became almost demonised in the early 1970’s; I thought “That’s for me”. I had now learnt not to seek approval. As a painter I cherish the legacy of a ‘conceptual’ education. My generation received, what some regard as the apotheosis of a ‘liberal education’.
CP: What are you currently working on within your practice?
GC: I’ve recently moved back to London. Since I left the RCA in 2006 I’ve been living and working in West Cork. Some years ago I learnt that the artist I ‘wanted’ to be was not the same as the artist I ‘needed’ to be. So now I make paintings about where I am, what I think, what I’ve read and most importantly what I’ve seen. Seeing is a very underrated activity.

I’m currently making landscape paintings that I regard as synthetic. Synthetic paintings exist simultaneously as object (the thing itself) and illusion (window on the world); the legacy of Manet.
My paintings also refer to modernist painting, particularly cubism and early American modernists like Stuart Davis. I’m becoming more concerned with illusion and apprehension. I want to make paintings that acknowledge both the human and the historic.

I’m also very suspicious of the academic orthodoxy that insists on contemporary landscape painting being acceptable providing it’s uncanny, sublime or abject. I want to make landscapes that celebrate sight and life, before I die.
There are some images of recent paintings on my website; www.GrahamCrowley.com
CP: What is so captivating about your work is your intense involvement and assurance with the medium of paint. Could you describe some of the techniques you employ?
GC: Yes. I abhor the convention of the artist as slacker convention – the ‘I meant it to be like that’ tendency. Whilst I was at the RCA I abandoned acrylics and started to use oil paint. At that point I had no option, but to learn how to paint. This doesn’t sound that remarkable until you realise that I spent 7 years in full-time higher education and not one of my tutors knew how to teach students painting as a skill. As a student one dared not to ask, for fear of being regarded as reactionary, or worse.The situation is no better today. The teaching of painting technique still has the stigma of the amateur. The ‘romantic’ notion of the artist as ‘free spirit’ staggers on.
Over the last 30 years I’ve employed a variety of methods including grisaille, impasto but most importantly glazing. Glazing has shown me why colours such as Payne’s Gray, Davy’s Gray, Indian Yellow, Transparent Golden Ochre and Rose Dore exist. Glazing is to painting what ‘ambient’ is to music. I’ve always been fascinated in ‘how things work’. I think it’s my ‘diet’ of Meccano, The Eagle and The Boys’ Own Paper in the 1950’s and 60’s.
I have the sensibility of a * ‘rodder’ rather than a poet. I think contemporary practice is becoming increasingly located in the vernacular. It’s important to study every aspect of painting, if only because knowledge presents choice; historical, theoretical and practical. I also consider carefully, the composition of my paintings, as every aspect of a painting carries meaning.


* rodder - as in Hot Rod. Someone immersed in the aesthetics of custom car and bike culture. Someone who values the vernacular. See David Hickey ‘Air Guitar – Essays on Art & Democracy’ and the work of Ed ‘Big Daddy’ Roth. Also check out Matthew Crawford’s ‘The Case for Working with Your Hands or Why Office Work is Bad for Us and Fixing Things Feels Good.’
CP: In your most recent works, do you feel you have revitalised landscape painting through your use of colour? 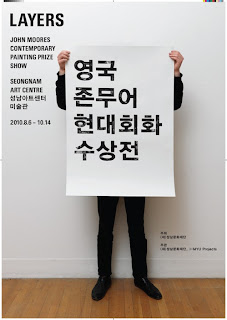 CP: Do you have any forthcoming projects or news to divulge?

GC: I’m currently in a group show of past John Moores Prizewinners in Korea. I have a one man show at Churchill College in March next year and I’ll be giving a lecture about my painting whilst the exhibition is on. I’ve plans for a graphic project; a mix of artist’s book and a semi-fictionalised graphic autobiography. (About 13 years ago I collaborated with Stuart Hood and Richard Appignanesi on a graphic book about the Marquis de Sade). I’m also starting work on some new paintings about South London with reference to The Ash Can School. For some years now, I’ve been fascinated by The Ash Can School (Sloan, Davis, Luks, etc) and their leftist publication The Masses. They were written out of American art history during the McCarthy years; Post-Second World War. They remain almost unknown in Europe and the UK. I’ve also been influenced by the Canadian David Milne.

CP: In a society where ‘modern art’ is increasingly institutionalized and administered, how important are places such as Deptford that have a growing community of artists?
GC: Vital. In the current dismal climate. It's clearly a cause for celebration and a matter of great pride. Here's something that reflects the 'health' and vibrancy of a community. Its projects like this that define Deptford.
It's a matter of recorded fact that 'modern art' has been institutionalised, commodified and is about as edgy as a j-cloth. It should come as no surprise that the rhetoric of modernism has found its place in tabloid journalism.
Contemporary art is a different matter. It's a moveable feast - it's what's happening now, by definition. Contemporary art doesn‟t even look like „Modern art‟. Modern art is a manifestation of an historical movement that has long been in decline. It doesn't speak to me any longer. It has always been an instrument of capital, celebrity and the media. Only now it's also an instrument of 'pikey'* culture. As far as I'm concerned Sky, The Daily Mail (et al), Heat, Simon Cowell and Charles Saatchi can have it. Popular culture was once a celebration of working class creativity. It's now a tool of oppression, and no amount of irony can redeem it.
*pikey. Once used as a derogatory term to describe Irish itinerants. But now a derogatory term to describe the aspirations of the ignorant, materialistic wealthy and the ignorant, materialistic poor, which are the same.

CP: Thank you Graham Crowley, it has been a fascinating interview!
Posted by DIY Educate by ZeitgeistArtProjects. at 13:16