Andrew Bryant is a visual artist, online editor of Artists talking and a freelance editor at Tate. Andrew also writes for a-n Magazine and contributes reviews regularly to www.a-n.co.uk/interface. His passion for arts extends beyond his own visual practice. Andrew has held various teaching posts in London, where he also participated in talks and events at the Royal College of Art and University of the Arts.
Chantelle Purcell talks to him to find out about the forthcoming show at Core Gallery The Eighteenth Emergency, an exhibition that brings together the work of international artists; Andrew Bryant, Frauke Dannert, Chas Higginbottom, Stefan Sulzer, Burcu Yagciogul and Daniel Lichtman.
CP: You have an upcoming show with Core Gallery ‘The Eighteenth Emergency’ what can we expect from this show?
AB: Six artists whose work, when looked at in the context of gender, might enable us to think about a relationship between masculinity, aggression and violence within social, ethical, political, linguistic and aesthetic fields.
CP: What was your reason for bringing together the artists within this show? And how do you think each artist individually approaches the theme of masculinity?
AB: Stefan’s piece and Burcu’s piece, I think, overtly speak about masculinity and aggression, but the other works in the show have a less intentioned and articulated relationship to the theme. Despite this – or because of it – I wanted to include them in the show in an attempt to push the theme of masculinity into places it might not necessarily be expected to reside.
Stefan’s is the most direct piece and seamlessly reflects my interpretation of Betsy Byers’ novel. Consisting of a double self-portrait in which the artist has bloody knuckles, we immediately construct a narrative of violence – what has happened here? The title You should’ve seen the other guy alludes to a fight, but what is significant I think is the form of the address this statement takes: who is speaking here, about whom, and to whom? The speaker, the ‘other guy’ and the listener, all presumably men, have their masculinity defined through their inclusion in this socially coded exchange. The utterance is a kind of shibboleth that reveals the tacit agreement amongst men that masculine identity is born of violence. 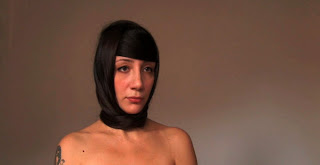 Burcu’s video is the most overtly political work in the show as it points directly to the covering of women in Muslim societies. Here though the woman’s own hair becomes the veil, as she ‘styles’ it to resemble a headscarf. This action articulates Judith Butler’s observation that there is “no I that can fully stand apart from the social conditions of its emergence…”.[1] This assertion of Butler’s, and Burcu’s video, both point to the complex relationship between history and the subject.
Chas has made two sculptures from a mixture of found and made objects. One is masculine, the other feminine. The pieces operate as a playful comment on the way fetishised details come to represent gender identity, and Chas pays close attention to surface quality and colour in this respect. The works are complex though, weaving cheeky art-historical references in with the cliché’s of sexuality represented in Hollywood movies. He is particularly interested in masculinity and femininity in pre-industrial Mexico and the American West, a time when perhaps gender was more clearly defined. Though the sculptures work well alone what I find interesting is that when they are brought together their dependency upon one another for recognition becomes delightfully clear: this is the idea that what makes a man a man is a woman and vice versa. But far from using this relationship to accentuate gender difference, an activity that can only result in misunderstanding, why not recognise the debt we owe one another and see this as the very thing that binds us together. In short, we all lack, and it is in the place of lack, where we need another to give form to our being, that difference gets broken down.
Dan’s work, a series of texts apparently drawn from the diary of an adolescent boy, poignantly reflects the dissecting action of language when we attempt to put ourselves into words. As the boy tries to make sense of the death of his Grandmother and his early relationships with the opposite sex, we become aware of the inadequacies of empirical language when it comes to matters of the soul. But beyond an exploration of the limitations of language, what is alluded to here is the necessity, or the perceived demand, that we must give an account of ourselves, and that only through this ‘accounting for’ will recognition of the self be achieved. That the narrator is a boy is not, I think, insignificant, since masculinity is particularly concerned with recognition, with definitions, and with the certainties that language seems to offer. Queer theory offers an explanation for this gender bias, describing masculinity as an unstable cluster of fears about effeminacy and repressed homosexual or homosocial desires...”[2] If this is the case it is little wonder that masculinity wishes to bolster itself through the apparently hermetic action of language.
Frauke’s collages reinscribe the visual language of modernity – flat surfaces, hard edges, clean lines – into the overt violence of high-tech military design. It is a process that, through the transformation of brutalist architecture into machines of war, articulates the barely hidden masculine aggression in the modernist aesthetic, or at least the logical progression of this aesthetic towards the fulfilment of its promise. Paradoxically, the flatness of Frauke’s collages, and the insubstantiality of their material reality – they are made of paper photocopies – simultaneously inject her images with a sense of vulnerability, but one which the subject itself cannot see. In fact it is this very vulnerability, this precarity, and its opacity to itself, that generates the paranoid attempt at mastery through aggression.
My piece, a ball made entirely of black plasticine, attempts to articulate the idea that our identities are constituted through an encounter with the other that leaves us partially opaque too ourselves. This opacity is experienced as loss, or trauma, and it is the way we respond to this trauma at the heart of identity that defines how we emerge as subjects. The cliché of the loan masculine figure destined to a life of broken relationships is one way of performing ones masculinity in the site of this injury. The black ball appears as an enigma, a shadowy, brooding figure, anonymous, mute and potentially violent: this is masculinity in embryonic form.
CP: Where do you get your inspiration for curatorial projects and does your own practise inform your approach?


AB: First off I want to make it clear that I am not a curator, I am an artist, and I approach curating from the perspective of an artist. There are highly trained, highly knowledgeable people out there who are curators and I’m not one of them. With this in mind, curating is a lot like making work for me because it is the coming together of an obsession, an unresolved question, with an object or location, or in the case of an exhibition, with a series of works. Maybe if I were a curator I might be trying to make sense of what the new trends are or where art is going (if there is anywhere to get). The difference is that for me it’s more like I have my obsessions and I look for other artists who’s work I think might touch upon the same things. For a long time I have been trying to gain some understanding – and this is as much through reading and studying other artists as making my own work – of the relationship between history and the individual. I am interested in questions about identity, subjectivity, agency, desire, responsibility – in other words questions about how best to live. And this exhibition, I hope, in some roundabout, modest way, brings up, at least a tiny bit, those kinds of questions.
CP: The work that you are exhibiting for ‘The Eighteenth Emergency’, (Black ball) is said to be inspired by an unconscious response to a personal tragedy. How important is the context of personal narrative and the everyday within artwork? And can art help to make sense of the world around us?
AB: Personal narrative can be important as the starting point for a work and I think it is unavoidable. People operate in the register of meaning and things acquire meaning because they resonate with us personally. It doesn’t matter whether or not the personal is articulated in the work but it can be used as a way in for the viewer, as something to identify with. As for making sense of the world, I think this is what art is for, and if it can’t do that then what’s the point?
CP: What artists have influenced your practice?
AB: Right now Francis Alys, Santiago Sierra and Jeremy Deller are the artists I am most indebted to; I only make work because they do.
CP: ‘Mouse and Ezzie’ in Betsy Byers novel equip themselves with fail-safe strategies for unexpected events. What emergencies do you think artists might face and how might they avoid these?


AB: I have no idea what emergencies other artists face. Life is the emergency. Art is just one strategy for dealing with it.
CP: You are writer and editor of Artists talking at a-n.co.uk, which has become an integral part of many artists’ practices. Kirstie Beaven (exhibitions editor at Tate online) stated that: ‘Artists talking is like a continuous open studios visit’. How can artists entering the world of ‘blogging’ make full use of this site?
AB: A blog can be an integral part of your practice, a space to reflect, to step back from your output and locate yourself in the wider world of art production. As a community and a networking tool a blog can broaden your contacts, provide you with support and encouragement and introduce you to many inspiring discussions. A blog is not the answer to all your problems, it wont suddenly result in curators and commissioners beating a path to your website, but if done well and signposted well, it can be an extremely useful part of your profile.
CP: With the rising phenomenon of the artist voice, what are the risks associated with having access to such a public audience through blogs? How can artists avoid being misinterpreted?
AB: I think doing a blog is the way to avoid it since you are wholly in control of what you say there.
CP: One debate on Artist talking was: The pros and cons of a MA. Could you outline some of these?


AB: An MA can speed up the development of your practice, widen your network, enhance your prospects and give you more confidence.
CP: You carried out an internship in 2008 with Tate Media. Can you describe how useful this was to you in your career?
AB: I am now a paid freelance editor at Tate so it was well worth it. Plus I can get into shows free. And I have made some good contacts.
CP: And finally, do you have any upcoming projects or plans you would like to divulge?
AB: I am about to embark on a collaborative process with a group of over 60s at Claremont Hall In Islington, I am developing various video, photographic and performance pieces and I am planning to make a documentary film about contemporary psychoanalysis.
CP: Thank you Andrew Bryant!